PRESS RELEASE – The BlueClaws are thrilled to announce that brand-new televisions are being installed in the two party decks that flank the first and third base SkyBoxes at FirstEnergy Park.

The installations include new, wall-mounted, 50-inch plasma LG televisions (as shown) which will give fans the chance to watch a show or other sporting event while taking in a BlueClaws game. 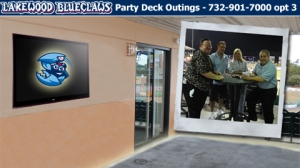 Previously, only SkyBoxes and the Kimball Medical Center Champions Club (which opened in 2011) had separate televisions.

A permanent bar will also be installed for the first time, replacing the portable bars that have been in use in the past.

In addition, Buster will be making visits to each group on the party decks at every game.

Party Decks are open-air, under-cover areas that offer fixed seating for 36 and tables and chairs available for additional seating.

Each party deck outing includes a 1 1/2 hour gourmet buffet complete with a customizable menu and soft drinks. A cash bar is also available.

With just two party decks available for each game, space is extremely limited and the BlueClaws encourage all interested parties to book their outing as soon as possible.

Thanks to John Cerone for the news.