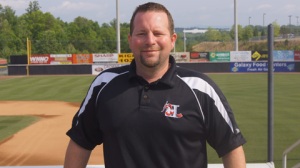 Downs, 41, has been with the Crawdads for six seasons, serving as the team’s assistant general manager since the fall of 2007. The Hudson, NC native’s main responsibility with the Crawdads is operations, overseeing all areas related to getting the stadium ready for games and events, as well as handling stadium and customer service questions as they arise. In addition to his vast operations duties, Downs accounted for 25% of the Crawdads total 2011 corporate partnerships, and continued to develop new partnerships throughout the 2011 season. He resides in Lenoir, NC with his wife, Heidi.

Ackerman, 24, is in his second season as clubhouse manager for the Crawdads and sixth year in the Texas Rangers organization. Before working with the Crawdads, the Spokane, WA native spent four years working in the clubhouse for the Spokane Indians, the Short-A Affiliate of the Rangers. He lives in Spokane during the offseason.

The 2011 South Atlantic League Outstanding Achievement Awards are voted on by all 14 teams in the league, as well as the umpires. The awards will be presented at the SAL Fall Meetings this October. For a complete listing of all of the 2011 award winners, visit http://www.southatlanticleague.com.

Crawdads Clippings:
The Crawdads will start the 2011 SAL Playoffs with the opening game of the Northern Division Championship Series against the Greensboro Grasshoppers on the road this Wednesday. Catch all of the action live on The Big Dawg 92.1FM and Hickorycrawdads.com!

Get Tickets:
Individual tickets, corporate partnerships, group outings and ticket plans for the 2011 season are available right now at the Crawdads Front Office or by calling (828) 322-3000. You can even purchase and print your tickets from the comfort of your home on Hickorycrawdads.com!