Most Famous Globetrotter Ever Coming to Myrtle Beach

PRESS RELEASE – The Clown Prince of Basketball, Meadowlark Lemon is coming to BB&T Coastal Field! The former Harlem Globetrotter who has entertained and amazed crowds for over 50 years will be at the Pelicans game against the Lynchburg Hillcats on Thursday, August 24 to throw out the first pitch, sign autographs and sell copies of his new book.

An inductee of both the Basketball and International Clown Halls of Fame, Lemon began playing with the Harlem Globetrotters in 1955. He’s played all over the world for the ‘Trotters and for his own teams, the Bucketeers and the Shooting Stars, before creating his current team, Meadowlark Lemon’s Harlem All Stars. 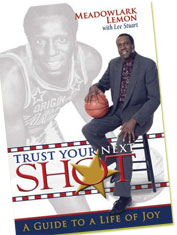 In addition to Meadowlark’s ceremonial first pitch on Thursday, there will be items for sale during the game that he will autograph for fans. He’ll also be selling copies of his book, “Trust Your Next SHOT: A Guide to a Life of Joy.”

Tonight the Pelicans will play the middle game of three against the Lynchburg Hillcats at BB&T Coastal Field with first pitch scheduled for 7:05 p.m. After a weeklong road trip to Winston-Salem and Wilmington, the Pelicans close out the regular season with three home games against the Salem Red Sox September 3-5. Tickets for all Pelicans home games, including the postseason, are available at the BB&T Coastal Field box office, MyrtleBeachPelicans.com, and by phone at 843-918-6000 or 877-918-TIXX.