PRESS RELEASE – The Coastal Plain League (pictures courtesy of Pat Grecinger) announced today that it will be holding a Five Millionth Fan contest starting Sunday in its ballparks. The CPL is celebrating its 15th season this summer and is inching closer to surpassing the five million fans mark. 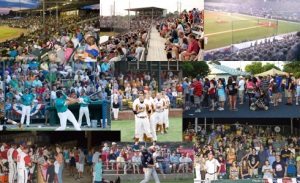 Stay tuned to the Coastal Plain League’s website, http://www.coastalplain.com, for more information on the winner of the CPL’s Five Millionth Fan contest.

The Coastal Plain League is the nation’s hottest summer collegiate baseball league. Celebrating its 15th season in 2011, the CPL features 15 teams playing in North Carolina, South Carolina and Virginia. The CPL gives college players the chance to refine their skills with the use of wooden bats. Players are housed with local host families for the summer and past experiences have been very positive for both players and hosts. Furthermore, the CPL has had over 930 alumni drafted and 45 alums make their Major League debut thus far. For more information on the Coastal Plain League, please visit the league website at http://www.coastalplain.com, and be sure to friend us on Facebook (at http://www.facebook.com/coastalplainleague) and follow us via Twitter (as cpleague).