TWITTER –  On Friday, May 13th, between the hours of 9 a.m. – 5 p.m., the State College Spikes and the Myrtle Beach Pelicans will face-off on Twitter for the first-ever Minor League Baseball Hashtag Battle. If the State College Spikes win the battle, we will donate 100 tickets to “Help N Hearts for Japan” which is a non-profit group that is raising funds for the relief effort for the tsunami victims of Japan. 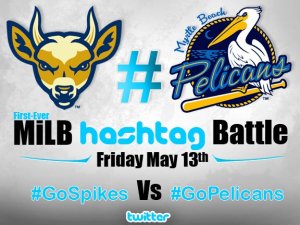 About Hashtags: A hashtag is used to categorize posts on Twitter according to topics. To add a hashtag to a tweet, you simply include the hash symbol (#) to your tweet. An example of a hashtag would be tweet that reads “#GoSpikes win the Hashtag Battle”.

Fans are encouraged to tweet #GoSpikes (no spaces) between the hours of 9 a.m. to 5 p.m. on Friday, May 13th. The team that has the most hashtags at the end of the battle wins!