PRESS RELEASE – The Grand Prairie AirHogs announced today that the team has been acquired by Southern Independent Baseball L.L.C. (SIB).  The ownership group resides and works in the Metroplex.  Gary Elliston, Chairman of the Board of SIB, is the senior founding partner of DeHay & Elliston L.L.P. in Dallas.  Elliston becomes the Chairman of the Board of GP Baseball Club L.L.C. 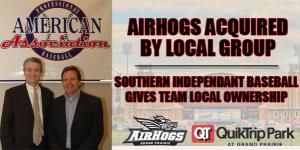 “I’m very excited about acquiring the AirHogs,” said Elliston.  “This is a great opportunity for us as well as the baseball fans in the area.  We are really looking forward to the 2011 season.”

“We can’t wait for the 2011 season to begin,” said Berry.  “Gary and I love the fact that we have a team right in our own backyard.  I look forward to working with the Grand Prairie community in bringing a championship to the area.  The City of Grand Prairie has been great to work with and we plan on playing baseball at QuikTrip Park at Grand Prairie for many years.

“We’ve always focused on providing affordable family entertainment in a county fair atmosphere.  We want baseball fans in Dallas County and Tarrant County to make this a destination place for fun during the summer.  We’ll have a lot of things going on during games.  And we’ll have more announcements about the upcoming season over the next few weeks.”

SIB purchased the AirHogs from Ventura Sports Group.  Roger, W. Christoph, Managing Partner of Ventura Sports Group said, “We are very proud of our development work on the award-winning stadium in Grand Prairie, and are delighted that SIB is the new owner, as they are local and very qualified to carry on the legacy.”

“We are very proud of our minor league baseball team in Grand Prairie,” said Mayor England.  “I think it’s very important that Gary and Scott are local guys.  They live and work in Dallas County and that means a lot to us.  I’ve talked to quite a few AirHogs fans and they are really excited about the new ownership group.”

SIB owns two other teams in the American Association of Independent Professional Baseball – the Shreveport-Bossier Captains and the Amarillo Sox.

The AirHogs begin their fourth season at QuikTrip Park on May 12 when Grand Prairie meets the Gary SouthShore RailCats.   Individual game tickets are on sale and can be purchased by calling 972-504-9383 or by visiting airhogsbaseball.com.