PRESS RELEASE – The Lake Elsinore Storm would like to introduce new and innovative creations to the Diamond Club menu such as the “Home Wrecker” and the “Filthy McNasty.” These two new food items headline a list of brand new options for the 2011 season.

One of the main attractions on the Diamond Club menu this season is the Filthy McNasty. This unbelievably big burger, which could feed four comfortably, is a two-pound burger stuffed with two hot dogs, bacon and cheese. It is then smothered in chili and topped with crispy onion straws. Whether you eat it with friends or try and finish it yourself, you are guaranteed to walk away satisfied. 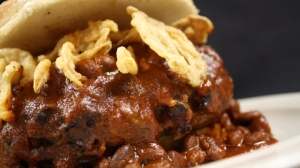 Another attraction is the “Home Wrecker.” This massive concoction includes three half-pound chili dogs topped with one-and-a- half pounds of French Fries, two pounds of chili and three-quarters-of-a-pound of cheese and diced onions. The catch is, if one person can finish this monster dog in less than 20 minutes, it’s free!

“We had a great reaction to these new items during the Sip N’ Swing last Saturday,” said Storm Catering General Manager Arjun Suresh. “My staff and I are excited to see how they catch on during the season.”

All of these new items will be available starting on Opening Night, Thursday, April 7, when the Storm take on the San Jose Giants to kick off season number 18 at The Diamond. For more information on the items contained in this release please contact the Storm front office at 951-245-4487.