TinCaps in 3D on Opening Night

“As a team, we are always looking for ways to raise the bar,” TinCaps Vice President of Marketing Michael Limmer said. “Opening Night at Parkview Field continues to be a can’t-miss event. For year number three we were looking for ways to take advantage of one of Parkview Field’s most unique features, the giant video board. We approached PUNCH Films to see if 3D was even an option. As soon as they said ‘yes’ we ran with it.” 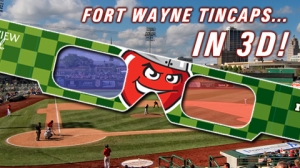 Opening Night will feature several 3D video board features throughout the game. “We’ll make sure to prompt fans when it’s time to put on their special 3D glasses,” Limmer said.

Every fan will receive a pair of glasses when they enter the ballpark. The 3D video experience will begin just before the team takes the field and continue throughout the game during several of the breaks between innings. The TinCaps’ free gameday program will also feature a 3D cover.

“I’ve never heard of another professional team featuring 3D video technology in this way, so this is a ground-breaking event for the TinCaps,” Limmer stated. “The fans in this community have come to expect a high level of entertainment at Parkview Field and this experience will certainly be unique. This is a one-time only event, so if you’re not at Opening Night you’re going to miss out.”

“We’ve had the opportunity to work with the TinCaps since 2009,” Derek Devine of PUNCH Films said. “When the team approached us with the idea for 3D on the video board we jumped at the challenge. With 3D video and film becoming more prevalent in the theaters and 3D televisions available for the home, it made sense to help the TinCaps bring 3D to the ballpark.”

Tickets are still available for Opening Night at Parkview Field on Thursday, April 7 with the first pitch at 7:05 p.m. EST. Visit the tickets page, call (260) 482-6400 or visit the Parkview Field ticket office for more information.