PRESS RELEASE – The Inland Empire 66ers are gearing up for the 2011 season, which will be filled with more giveaways, fireworks nights and promotions than any prior season in team history.

Inland Empire will kick the season off with a four game set against their I-10 rivals the Rancho Cucamonga Quakes. The weekend full of fun begins on Opening Night April 7th, with a magnet schedule giveaway. On Saturday, April 9th, the first 1,500 fans in attendance will get a 66ers Wearable Blanket with Sleeves presented by Redlands Jewelers. 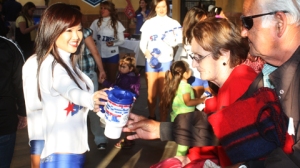 Angels hats are another highlight of the 2011 promotional schedule. Fans will receive an Angels Flashback hat on Friday, July 29th, and an Angels Plaid Hat on Sunday, August 21st. A San Bernardino Spirit cap will be handed out on Friday, May 13th for those who appreciate the rich tradition of the ballclub.

In addition to the giveaways the 66ers will light up the Inland Empire sky during three fantastic firework extravaganzas on Saturday, May 14th, Monday, July 4th, and Saturday, September 3rd.

The 66ers will be invited to celebrate the team’s history during Turn Back the Clock Tuesdays all season long. Every Tuesday the 66ers will wear throwback San Bernardino Spirit jerseys, harkening back to the 1987-1995 era when future greats like Ken Griffey Jr. played in the Inland Empire and the squad brought home San Bernardino’s first California League title in 1995. In addition, every Tuesday will feature $2 tickets, beer and parking.

Long time fan favorite promotional nights like Thirsty Thursday and 50¢ Fridays will also be back in 2011, along with the Wednesday night invite to all dogs during the dog days of summer for Bark in the Ballpark.

Entertainers coming to thrill the crowd during the game include the Inflatamaniacs on Friday, April 22nd, and the return of Christopher and his dancing mannequins on Friday, June 10th.

Children and adults alike are encouraged to participate in the numerous theme nights throughout the season. Stars Wars Night, Transformers Night, and Harry Potter Night are a few to mention.

The 66ers ticket office is offering a special 24 Game Premier ticket plan that includes all giveaways, firework shows, weekend dates, opening and closing day, and the 4th of July. For just $6 a game fans can guarantee admission and use of the season ticket holders’ gate for all of the premier promotional nights on the 66ers 2011 schedule. For more information please call the ticket office at (909)-888-9922.

The Inland Empire 66ers 2011 season begins on Thursday, April 7th when the California League partners of the Los Angeles Angels of Anaheim host the rival Rancho Cucamonga Quakes. Reserve a date for your upcoming group event or get season tickets for the upcoming 2011 season by contacting the 66ers front office at (909)-888-9922. All promotions are subject to change. Please check http://www.66ers.com for updated information.