The new Atlantic League team in Sugar Land (TX) has a name. The Sugar Land Skeeters beat out the Lizard Kings and King Canes.  Read more and view unveiling here from ABC13.  A new team website is up and running at www.sugarlandskeeters.com.

Officials of the team today announced the results of an “Extra Innings” vote, conducted online at http://www.namesugarlandsteam.com as well as by mail. “Skeeters” was the leading vote-getter among three finalist names during a three-month-long name-the-team contest. The “Extra Innings” vote followed an unprecedented response to the original “Name Sugar Land’s Team” contest. With nearly 8,000 entries, it is believed to have been the most popular team naming contest in Minor League Baseball history.

“I think the entry forms said it best. It just sounds like a fun minor league baseball name for this region,” said Matt O’Brien President of the Sugar Land Skeeters. “With each day moving forward our Sugar Land Skeeter brand will become synonymous with professional baseball and affordable family fun.”

The minor league team also announced today the launch of its new website http://www.SugarLandSkeeters.com where fans can reserve 2012 inaugural season tickets. Season Tickets for all 70 home games are $575 per seat, about $8 per game. A refundable deposit of just $50 per seat can be made to reserve tickets and enter a priority seat selection process. Seat selection for season ticket holders will be made at a later date, with priority of selection based on reservation date, length of term selected and number of seats. 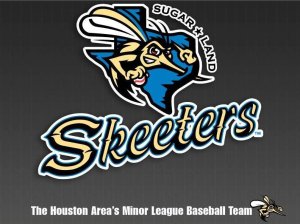 Tony Johnson from Sugar Land was chosen at random from all those who submitted “Skeeters”, and was awarded Lifetime Season Tickets. Mr. Johnson’s original submission suggested Skeeters for its relevance to Fort Bend County, youth appeal, and represents the kind of fun minor league baseball is known for.

The new identity honors the community’s rich sugar heritage. A fun, determined Skeeter lancing a baseball is the centerpiece of the identity, which includes Texas and sugar cane imagery. Fans will also enjoy an “SL” cap logo and the team’s official “Skeeters” lettering, both made of sugar cane. The team’s sleeve emblem showcases the Skeeter flying over the state of Texas marking Fort Bend County with its proboscis.

Rawhide Yellow, Imperial Blue, Refinery Red and Nighttime Black make up the club’s new official colors. The Skeeters are the only professional sports team to have these team colors. The team will unveil their new uniforms for the 2012 season at a later date.

A limited amount of Skeeters merchandise including hats, tee shirts, and novelty items will be made available for the first time and exclusively at the Skeeter Pro Shop located at 16160 City Walk, Sugar land Town Square, Sugar Land, TX during