Impressions of a Ballpark Hunter: Discovery of a Forgotten Ballpark

Muzzy Field has been described as a forgotten ballpark, one that has slipped out of the minor league baseball conscience. If you are not looking for it, you would probably bypass it. The historic facility is well off the beaten path and seems miles from anywhere among the rolling hills and the one lane roads of Connecticut.

Conversely, it can be a nice pleasantry for a select few of us who have become indifferent with many of newer ballparks that have been popping up during the last fifteen years in the United States. Where have all the eccentric, unique and just plain odd looking structures all disappeared to? 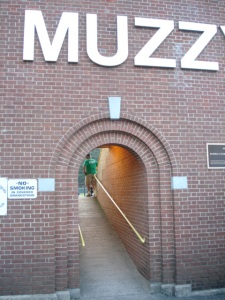 Somewhere between SR-8 and I-84 lies the small community of Bristol, Conn.; where Muzzy Field has been standing since its creation in 1912. The ballpark sits off the main road and is within walking distance of store fronts, parks and neighborhood homes-where many new ballparks do not dare to be built. Its current grandstand was constructed in 1939 and has not changed much since that time.

The ballpark is broken into three sections, with bleacher style seating down each baseline and a covered grandstand adjacent to home plate.

It is not perfectly symmetric by today’s ballpark standards. It is a concept that is inconceivable by today’s ballpark architects: high perch press box, narrow exterior concourses, lack of bowl seating, small souvenir stand and concession booth (that serves a creation called the Muzzy Dog) that serves as a testimonial for all ballpark hunters to venture to.

There has been a collection of baseball played here from high school, college and minor leagues. The last affiliated ballclub were the Bristol Red Sox who left town after the 1984 season, but even though the minor leagues had vanished from site, there were a few more college wood bat leagues who tried to take on the mantle left by the Sox.

There is baseball this season-the college wood bat version that has taken up residency in these types of older baseball cathedrals. The newest members of the New England Collegiate Baseball League are the Bristol Collegiate Baseball Club who looks toward many more summers at Muzzy Field. In a ballpark that would never see the light of day in both affiliated and independent baseball, the Bristol club hopes to entertain fans with a collection of collegiate all stars who are just as hungry as their minor league contemporaries in reaching the major leagues.

The club does not have an official nickname, an apparent nod to when baseball teams were either named by local sports writers or the color of their hosiery, but do look dapper in their black and white uniforms. Players collect 50/50 raffle tickets from underneath the cover grandstand during the contest and ticket prices are no more than four dollars-one buck if you are twelve or under. It is an atmosphere that is enlightened by the smell of pine trees that line the outfield walls and where t-shirts and caps are hung over a plastic picnic table near the entrance of the gated stadium. 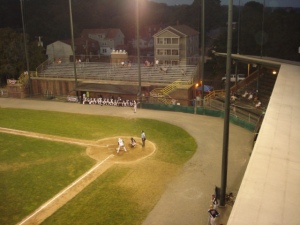 If the baseball gods can align the stars and supplant a college wood bat league in a place like Muzzy, the best anyone could do would to spend an afternoon or an evening inside its gates. Independent and affiliate leagues can no longer justify playing inside its brick laden structure, but in a league that gives older parks a second chance, small towns dotted across New England that include Sanford, North Adams, Keene,  and Laconia all get the chance to once again to become noticed again during the baseball season.

Marc Viquez is a contributing author for Ballpark Business (www.ballparkbiz.com). A fan of baseball for most of his life, Marc has been traveling around the country writing about minor league baseball since 2001 for various websites and print publications. When he is not searching down a ballpark, he can be found teaching middle school in Indianapolis, Indiana.