PRESS RELEASE – The Baysox will hold their 11th annual Free Family FunFest on Saturday, March 27 from 10:00 a.m. – 2:00 p.m., presented by Entertainment Avenue. Join the Baysox lovable mascot Louie and his pal the Oriole Bird for a day of FREE fun at Prince George’s Stadium!

This year’s FunFest will feature, inflatable activities in Louie’s Kids Park and interactive games on the stadium concourse. There will be a scavenger hunt on the concourse level of the stadium and other activities on the field (weather permitting). There will also be live music by Greg Farley and free face painting by Kreative Kharachters! Fans can also stop by the Baysox gift shop to check out all the great new merchandise for the 2010 season. Stay tuned for more additions and updates to this great annual event! 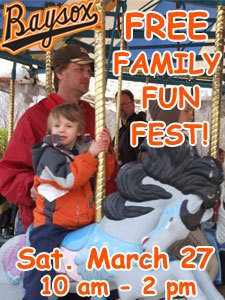 The Baysox are excited to have Prince George’s County Fire/EMS Department and the Bowie Police Department join in on the fun again this year. The fire department will bring a fire truck and other interactive activities for families.

Baysox General Manager Brian Shallcross looks forward to the event each year. “FunFest is our unofficial start to the season,” Shallcross said. “We are excited to see our fans and to open the doors of the stadium for another exciting season of Baysox baseball, and we hope FunFest has become a ‘can’t miss’ event for the community.”

The younger fans in attendance are also invited to sign up for Louie’s Kids Club at FunFest. The Kids Club is open to kids ages 3-12, and is FREE to join! The Baysox will host Kids Club Member Only Events each month of the season, and members will receive one free gift for attending any Baysox game in 2010!

The Baysox will open their 18th season as the Class AA affiliate of the Baltimore Orioles on Thursday, April 8, 2010 at home against the Richmond Flying Squirrels. Don’t miss a moment of the action as the Baysox attempt to bring home their first Eastern League championship in Natural Definition!